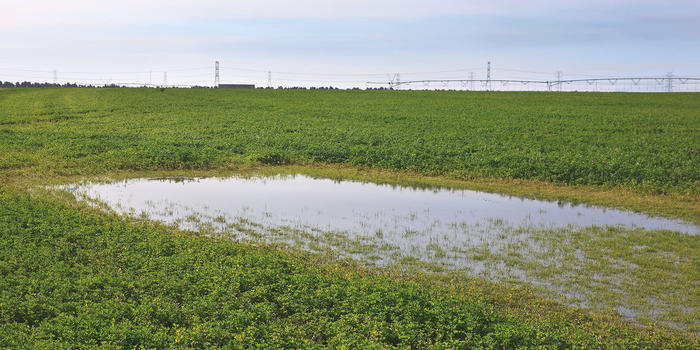 A large private area of cultivated farmland, predominantly short turf and alfalfa and also a small fenced pool with mature phragmite reedbeds that is strictly private.
Access was previously granted through the owner, but this is now no longer the case since June 2012. Pivot fields are remarkable artificial agricultural systems that have helped make the desert bloom. These are also called “circle irrigation” or “center-pivot irrigation” systems, where sprinkler crop irrigation equipment actually rotates on wheels around a central pivot. The sprinklers irrigate continuously and often there is a surplus of water in some fields, with water creating artificial wet-grassland conditions and periodically flooded ditches and pools. Even populations of Green Toads flourish on the wet ground. The result is a large area of bright green short wet turf, alfalfa and other crops and a green landscape on the semi-desert soils. Furthermore this particular area of pivot fields also has many banks of Tamarisk and Casuarina wind-breaks, small range land areas for the large camel herds and a huge artificial pond. The fact that it hosts such a variety of habitat and is fenced-in makes it an outstanding location for a large variety of birds.

This is a reliable site for both passage and wintering raptors including Eastern Imperial Eagle, Greater Spotted Eagle, all Harrier species, Northern Goshawk, Lesser Kestrel, Bonelli’s Eagle, Western Osprey. The fields host huge numbers of passerine migrants including Eurasian and Oriental Skylark, Water, Meadow, Tree, Tawny and Buff-bellied Pipit. If ever Olive-backed Pipit were to be discovered in Kuwait, it would be at this location.
Kuwait’s first Little Whimbrel and Pectoral Sandpiper was found here in December 2007 and October 2011 respectfully. Caspian Plover, Dotterel, Eurasian Golden Plover and Sociable Plovers can be found on passage, and Indian Roller has been recorded in winter.
This is a reliable site for wintering raptors – Spotted, Steppe and Eastern Imperial Eagles, Long-legged Buzzard and harriers. By driving along the tracks traversing the fields, large flocks of Water Pipits and Skylarks can be searched through for rare pipits and the Oriental Skylark. Exotic attractions such as Indian Roller are often spotted here and White-throated and occasionally Pied Kingfisher are seen near the pond. The extensive pivot-irrigated fields are surprisingly good for all sorts of waterbirds, including flocks of Northern Lapwings, sandpipers, and egrets on passage. Caspian Plover can sometimes be found on passage, and the critically endangered Sociable Plover have been recorded here several times. Kuwait’s first Little Whimbrel was found here in December 2007. Although not a protected area, this unique farm is strictly private – access is through the guarded entrance gate with pre-authorised permission. This location offers Kuwait’s most extensive area of green field habitat creating a unique otherworldly environment for Kuwait and a true refuge for birds. Unfortunately, shooters know this and other migratory hot-spots well and will often drive by, outside the fenced-in agricultural lands, and shoot at birds from their cars.

No other biodiversity of interest, although Arabian Red Fox and Spiny-tailed Lizard have been observed.

Reach out and request the owners to grant permission on a restricted basis for access by selected birders to ensure that on-going surveys can be conducted.