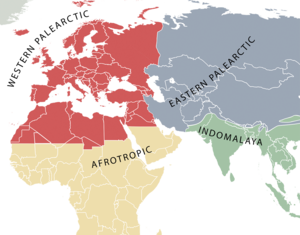 Kuwait’s geographic position lends it many special distinctions. In terms of its biogeography, Kuwait is located at the southeastern corner of the Western Palearctic zoogeographic realm. The Western Palearctic as delineated by ornithologists (Cramp, Simmons and Perrins 1977) is one of Earth’s 8 ecozones, covering Europe, Western Asia and North Africa.

Kuwait’s birdlife still remains poorly understood. Studies by scientists are limited. Even baseline information on bird populations is remarkably scarce. Compared to birdwatching in Europe, Australia or America, much of the Arabian Peninsula and the inner hinterlands of the Middle East remain very little explored by ornithologists. On the positive side, this sense of “unexplored territory” is intriguing for visitors who are fascinated and motivated by finding rare birds. And it means that, in Kuwait, amateur naturalists can genuinely contribute to baseline natural history knowledge.

Over the last few years Kuwait has become very accessible to visitors and residents seeking to explore wildlife. Gradually more and more is being done to study, promote and monitor its birdlife. Kuwait’s unique geography and its wealth of birdlife make it an outstanding area for ornithological study and a fascinating crossroad for monitoring global bird movements. Moreover, establishing credible and reliable records of bird movements will help us better understand the changes brought about by human impact on the Earth – from local scale landscape change to climate change.

At the same time, birds are slowly gaining appreciation as one of the most important elements of Kuwait’s Natural Heritage. Certain aspects of birdlife are traditional in Kuwait culture. Kuwaiti people have a long history of respect for the desert wilderness. In the desert, birds were used as a food source and for recreation. Falconry has been practiced for millennia. In the last half-century remarkable changes have taken place in Kuwaiti society that have challenged the knowledge and appreciation of the historic traditions connected with nature. Several Kuwaitis, resident expats and visitors are beginning to revive an interest in natural history and outdoor recreation. The attraction of birds can play an important part in re-connecting local culture with the natural world.

Despite its small size and relatively harsh climate, more than 390 bird species and 17 subspecies have been recorded in Kuwait, representing both the Western and Eastern Palearctic assemblages and rare transients from other regions. These species records have been made by diligent birders and then become part of the official country list after careful documentation –often with photographic proof– of that species’ presence in the country.

Although this is the most comprehensive review of the state’s birdlife to date, we are sure that several more species will be recorded in Kuwait in the near future. The Kuwait Ornithological Rarities Committee (KORC) has been instrumental in collecting and organizing the country’s ornithological information. Efforts are being taken to better coordinate ornithological studies and amateur bird recording in the country.

The best times to observe birds in Kuwait

Birding can be interesting throughout the year in Kuwait, but especially so from September to May (June to August being uncomfortably hot). The period of spring migration, peaking from mid-March to early May, is without a doubt the most impressive time to see birds. The quantity and eastern flavor of the migration is characteristic of the eastern frontier of the Western Palearctic. During spring, autumn and mid-winter, it is relatively easy to see a large variety of the birds displayed in this web site, without venturing far from Kuwait City.