Birds in different seasons in Kuwait 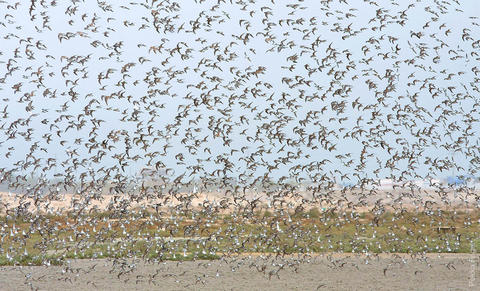 The world of birds is full of change throughout the year. The rhythmical timing of mass population movements occurs twice a year – spring and autumn. Although many aspects about where the birds go or what specifically causes their movements here in Kuwait are still poorly understood, we do know that each season is characterized by specific and often predictably timed movements, arrivals and departures.

One of the key features of migration is the mass movement of very large numbers of birds twice a year. Many smaller birds pass in flocks by night, so they may go unnoticed, especially during the autumn passage. In a nearly flat low-lying desert coast as in Kuwait, places from which to easily witness seasonal mass migration movements are rare. Kuwait has two notable exceptions. Raptors, including vultures, eagles and falcons, concentrate around a migratory “bottleneck” created by the Gulf in general and by Kuwait Bay in particular. These raptors prefer not to fly over the sea because they use warm rising thermals to soar above land. As they move along the Arabian coast they will funnel around Kuwait Bay, often using the Jal Al-Zor escarpment as a northeast-southwest line of flight. In the past huge numbers of Lesser Kestrels would pass along this coast and often over Kuwait City during the spring and autumn migrations. Now although the numbers of this particular species have declined, many other raptors still funnel through this coastal route in flocks or small groups– eagles, buzzards, and harriers among them. During the evening groups of eagles and buzzards may roost on rocky lookouts in the desert.

In addition, migrating and wintering wetland birds often form spectacular flocks as they gather at wetlands, especially on intertidal mudflats. Wetland birds are specialized species that feed and live exclusively in productive marsh and mudflat habitats. Huge numbers of these birds may congregate, for example at a marshland shoreline during high tide when the mudflats of Kuwait Bay are nearly totally inundated. Flocks of flamingos, waterfowl, gulls, terns and waders, numbering in the thousands at a single site, make up one of Kuwait’s most fascinating bird migration spectacles.

Spring migration begins for most birds in February and continues through to late May. The peak period of bird passage through Kuwait is late March and April. Spring brings a true spectacle of birds to Kuwait, and with most species “dressed” in their breeding plumage, the season is most colourful. Many birds have crossed the vast sea of sand in the Arabian Peninsula and the green patches they find in Kuwait may be the first suitable feeding and resting habitat they have encountered north of the bleak desert interior. Most are on their way to the northern temperate landscapes to breed, but spring migrants also include temperate climate Palearctic birds wintering in the Gulf area such as waterfowl, waders, songbirds and raptors.

Although many of the birds that travel north to temperate climates are essentially tropical birds, they make this incredible and relatively hurried journey to the northern temperate summer-green landscapes in order to breed, because there they experience greater likelihood of breeding success. They must arrive by early summer, when daylight periods at the breeding grounds are prolonged and a huge explosion of insect-food is available. Many long-distance migrants actually reach the Arctic Circle to breed during the long arctic summer days of June.

The passage southward is the most prolonged migration season. The returning adult numbers are augmented by the recently-fledged juvenile young (1st year birds) and the passage is unhurried and less predictable than in the spring. The number and variety of birds stopping and gathering in flocks in Kuwait during autumn is perceptibly lower than in spring due to the landscape and climate being less hospitable. The land is parched and very hot throughout this migration period. Autumn passage has actually begun by the first days of July (for many waders for example) and may still be going on in November. The peak movements are usually in August and September. 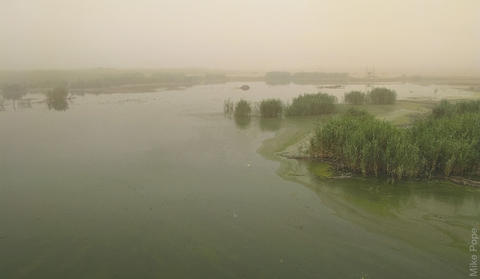 Despite the movement of large numbers of birds, it may come as a surprise that on some days the skies are extremely void of birds. Many species travel during the cooler nighttime and may overfly the country completely without stopping. However, autumn can be one of the most exciting times to look for rare transient birds or vagrants, those that have strayed off course to find themselves beyond their normal migration range. Unlike spring, in which there are isolated tiny patches of water and scattered greenery during most years, during the autumn birds are hard-pressed to find adequate resting places – so the limited number of small wet oases or even clumps of trees, can become “migrant magnets.” Some of these areas (especially where there is a permanent water source) can be termed “vagrant traps” – nearly every time you visit them they are likely to reveal unusual rare transient birds! Kuwait has built a reputation for hosting some amazing vagrant birds, visiting from far off their normal range – and most are found at these interesting oasis-like locations. 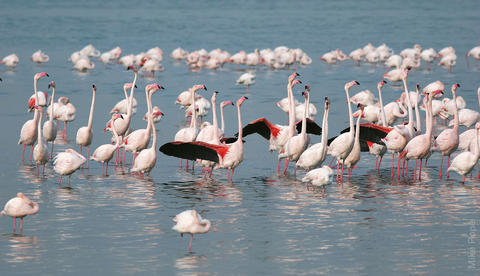 The Mesopotamian wetlands of Iran and Iraq and their natural extensions Bubiyan and Kuwait Bay are wintering sites of global significance for migrant birds. So Kuwait itself, situated at the northwestern end of the Gulf, is also extremely important. The northern Gulf acts as a regional refuge for migratory birdlife driven south by the harsh winter weather of the steppes and uplands just to the north. Many birds reach Kuwait in winter that are never seen in any other season, and severe winters are especially interesting times to see birds well to the south of their normal range. This includes large numbers of wintering waders, gulls, herons, waterfowl, raptors and passerines like robin, thrushes, pipits, wagtails and Hypocolius as well. During this time vagrants from the wider region, from such unexplored areas such as Iran and Iraq, frequently visit Kuwait in very small numbers. So winter is an excellent time to observe rare transients and vagrants in Kuwait.

Summer in Kuwait is an unusually harsh period; nevertheless a limited number of species are found breeding. In addition some dispersing non-nesting individuals and/or birds from nearby breeding areas that have begun to move on, can be found. Because Kuwait is immediately south of the lower Mesopotamian valley and the Iranian coast, where many bird species breed in riparian habitats and vast marshlands, it is probable that many birds enter this country immediately after breeding. Summer is a difficult period in Kuwait for birds as temperatures soar, conditions are arid and may become even harsher due to hot dry winds and dust storms. Many birds seek refuge where there is water, food and shelter. So the best places to see birds during this time is where they may be nesting, near water and where they can take refuge in the limited number of greener and wetter micro-habitats.