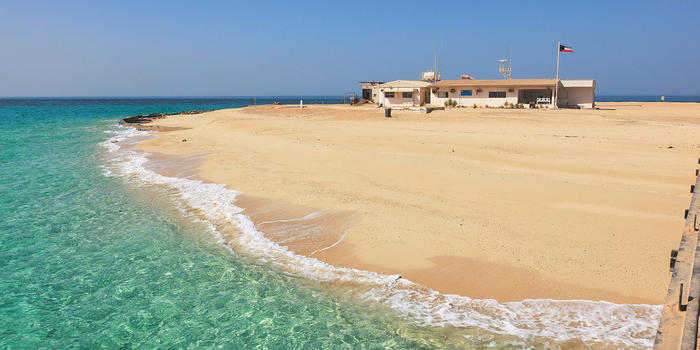 The name "Qaru" was derived from the large amounts of petroleum sediments in the areas, known as Qar in Arabic. It is the smallest of the off-shore islands and also the furthest away from Kuwait mainland (approximately 37 km from the southern Kuwaiti coastline). This island was the first part of Kuwaiti soil that was liberated from Iraq during the Gulf War on 21 January 1991 and a military/coast guard force is stationed there, obviously restricting access.

Qaru is much smaller than Um Al Maradim which lies nearby. Qaru is one of the least explored areas for birdlife in Kuwait because it is rarely visited by naturalists during spring migration, winter or autumn. Summer-time with soaring temperatures usually produces very few birds, but both Qaru and Um Al Maradim host visiting Socotra Cormorants and Terns during the summer. Since Qaru is so far offshore it is possible that during difficult weather, migration fall-outs occur frequently here. In one such fall-out in late April 2013, 43 species of birds were recorded on this tiny islet!

The sand islet is surrounded by an impressive coral reef. Populations of Indo-pacific Bottlenose Dolphins and are commonly seen fishing around the island. The island hosts and important part of Kuwait's nesting Sea Turtles; including both Hawksbill Turtle (Eretmochelys imbricate) and Green Turtle (Chelonia mydas).