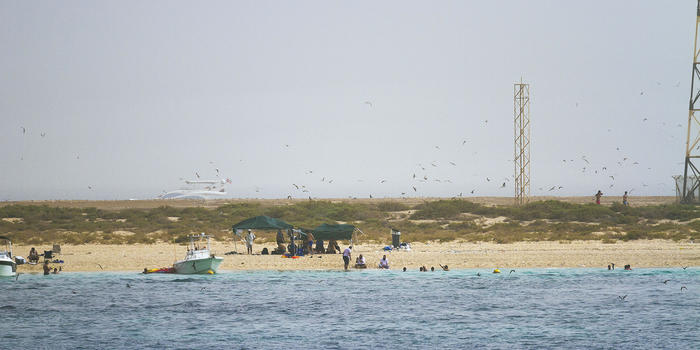 A small sandy island off the south of Kuwait. Access is open to all, but visitors should respect and avoid disturbing the breeding Tern colonies in the summer months. Kubbar is historically famous for it’s colonies of breeding sea birds. One of a small group of coral islets and associated reefs. Part of the island is covered in salt-tolerant bushes, other areas are dominated by Seidlitzia annuals, and there are patches of bare ground. Beaches are mainly sandy with some rocky stretches. A favourite recreational area for weekend trippers, scuba divers and fishermen. A small solar energy plant provides power for a beacon in the centre of the island. Unlike Failaka and the islands and muddy islets further north, which are directly influenced by the turbid Delta waters, the tiny islets to the south of Kuwait are subtropical coral cays. They are surrounded by beautiful azure waters but they are rarely visited by birders. Of these, Kubbar is the most accessible from Kuwait City and also probably the most significant for seabirds.

This IBA was last assessed in 1993, so there is a need to formally conduct vigorous surveys to re-assess and update the status. Disturbance and wilful killing are major problems at the seabird colonies. The island was included in a Marine Park proposed by the Kuwait Institute for Scientific Research in 1988, and included together with several submerged coral reefs in the draft Nature Conservation Act submitted by the Environment Protection Council.