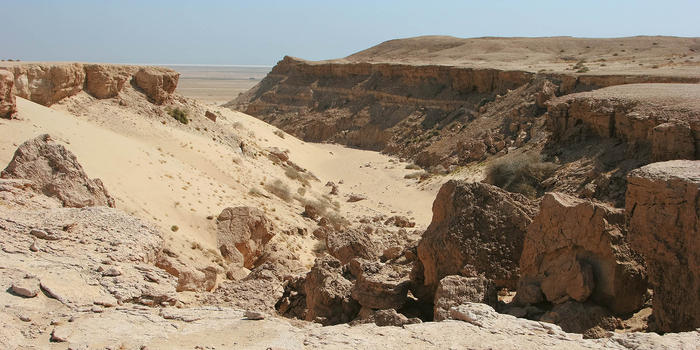 A limestone and sandstone escarpment rising steeply to 116 m from the coastal mudflats and associated saltmarshes and sand dunes on Kuwait Bay. A gravel plain extends northwards from the escarpment ridge and gives rise to the extensive wadi system of Ar-Rimam. Most of the park is sandy desert, with much gravel in northern areas. Dunes of the coastal zone are dominated by Zygophyllum, higher areas of sand by Rhanterium and Cyperus, whilst on the gravel plains Stipa grass is dominant. In spring, the playas are covered in Gynandriris irises. Soil fertility is very low and the site has no agricultural value; the site was much used during winter and spring for prolonged recreational camping activities before the recent conflict. The ridge extends fromAl-Atraf to near Subiya. There are a limited number of open access points, some via tarmac t the Mutla Repeater Station and others via dirt roads to the east of Bahra.
SAANR is a 320 sq. km reserve within this IBA to the north of Jahra City on both sides of the Subiya Road with access by permit only. The north-western section contains a long stretch of the Jal Az-Zor escarpment, a series of small wadis, including Wadi Ar-Rimam, an isolated group of trees at Tuhla and a large area of regenerating semi-desert. The south-eastern section consists of part of the shoreline of Jahra Bay, sabkhas, areas of bushes and another large area of regenerating desert.
This 320 km² gated and fenced Sabah Al Ahmad Natural Reserve was formerly acclaimed as Kuwait’s first National Park and falls within the Jal Az-Zor IBA. It is definitely one of the country’s most intriguing nature reserves and is very well protected. The reserve includes sweeping landscapes of desert and steppe grassland, gently undulating gravel flats and rocky scarp ravines, located near the western shore of Kuwait Bay. The reserve spans on both sides of the road going north to Subiya, but access is strictly by prior arrangement and with a permit; and visitors normally need to be accompanied by a resident Kuwaiti or local birder. The reserve’s western section is dominated by the Jal Az-Zor escarpment rising to 116 m elevation, which is intersected by open canyon-like scarp wadis

A reserve of steppe grassland, stony desert and rocky ravines and wadis located to the northwest of Kuwait City, on both sides of the road to Subiyah. Access is strictly by prior permission, and visitors need to be accompanied by a resident Kuwaiti birder.
The western section is dominated by the Jal al-Zor escarpment, and the wadis for several kilometres either side of the track are favoured by Red-tailed Wheatear in winter, along with the much commoner persica Mourning Wheatear. This area has also held two Hume’s Wheatears in recent winters (2005 and 2009/10) while Asian Desert Warbler, Mauryan Grey Shrike and Trumpeter Finch are typically found in this arid habitat. Dunn’s Larks and Black-crowned Finch Larks breed annually on the adjacent steppe plateau, while small numbers of Macqueen’s Bustards are usually seen in winter each year. Regular watching in recent years has established that flocks of Caspian Plovers are regular in early spring while, in migration periods, Tulha – an area of bushes that surround a small pool within the reserve – is often temporary home to hundreds of migrants filtering through the otherwise barren landscape. Tulha is often a good place to search for migrant Basra Reed & Sykes’s Warblers and Pale Rock Sparrows amongst the commoner species such as White-throated and Rufous Bush Robins, Blue Rock and Rufous-tailed Thrush, Eastern Orphean Warbler and Semi-collared Flycatcher. Kuwait’s first Lappet-faced Vulture and Mongolian Finches have occurred here in recent years, and an Eversmann’s Redstart was found in November 2010. The surrounding trees host many Scops Owls during migration; careful checking of these might produce a Pallid Scops Owl, which has also been recorded in Kuwait. Recently, a new pan has been made in one of the wadis, and this has already attracted both Common & Demoiselle Cranes, as well as many migrating raptors stopping to quench their thirst.
The Jal Al-Zor escarpment provides the necessary updraft for many of the migrating species, in particular the raptors in Spring and Autumn.
The rocky wadi habitats are favoured by Mourning Wheatear and the much rarer Red-tailed Wheatear; and on rare occasions Hume’s and White-crowned Wheatears in winter, as well as Mongolian Finch. Other more typical and common birds are Asian Desert Warbler, Mauryan Shrike and Trumpeter Finch. Dunn’s Larks and Black-crowned Sparrow-Larks breed annually on the adjacent steppe-like desert plateau, whilst small numbers of Macqueen’s Bustards are usually seen in winter each year. Flocks of Caspian Plovers are regularly seen in early spring while on migration. The Reserve has two significant wetlands: an artificially flooded playa basin and a small artificial pond at Tulha. The artificial shallow lake created in the Umm Al-Rimman basin has obviously not become stabilized as a natural feature yet but it does resemble an extensive wetland and could be attractive to wildlife in the future. Common and Demoiselle Cranes, as well as many migrating raptors are now stopping at the newly flooded basin to quench their thirst. Tulha is a tiny artificial pool fed with brackish water pumped from a deep borehole; it is especially attractive for birds. In fact Tulha acts like a “migrant magnet” since it has bushes and trees providing cover around the small pool in the middle of the otherwise barren sandy gravel plain. Tulha is often a good place to search for migrant warblers including the Basra Reed Warbler. Also Pale Rockfinch and Yellow-throated Sparrows can be seen amongst the commoner species such as White-throated and Rufous Bush Robins, Rock Thrush, Eastern Orphean Warbler, Lesser and Common Whitethroats and Semi-collared Flycatcher. Kuwait’s first Lappet-faced Vulture and a few Crested Honey Buzzards have been observed here in recent years as well as Grey-necked, Rock and Little Bunting; an Eversmann’s Redstart was found in November 2010 and in March 2012 the second record of Radde’s Accentor was made. Even the few trees at Tulha sometimes host many Scops Owls and the rarer Pallid Scops Owl. The diversity of habitats in this reserve is unique for Kuwait and includes a few tiny green spots, such as grassy playa meadows and semi-desert fringes that fill with Gynandriris irises in spring. What is particularly interesting to note is that the reserve has been fenced for a number of years, restricting access to grazers (sheep, goats and camels) and a diverse natural flora is re-establishing itself which in turn attracts insects, birds, mammals and reptiles. This is a sure sign that the desert is capable of regenerating itself with a little help provided by low cost fencing and some management to maintain the fencing and prevent indiscriminate grazing and poaching. This is in marked contrast to so much of Kuwait that has become a barren wasteland due to overgrazing and excessive trampling by off-road vehicles. Setting aside additional fenced reserves to protect more areas from domesticated livestock, along with re-introducing native grazing ungulates, would enable the desert to regenerate into a living landscape once again.

Arabian Red Fox breeds and there are a host of reptile species have been recorded in the Sabah Al Ahmad Natural Reserve (SAANR), including Desert Monitor, Spiny-tailed Lizard and many smaller lizards. There is an abundance of unique desert flora within the SAANR Park.

This IBA was last assessed in 1993, so there is a need to formally conduct vigorous surveys to re-assess and update the status. Prior to the Gulf conflict, the park had been completely enclosed but much of the fencing was destroyed or removed during the Iraqi occupation. The Park management and protection schemes have not yet been re-instated. Without a resumption of these measures, the area will again be subjected to former major problems: excessive hunting/falconry, destruc- tion of desert crust by vehicles, overgrazing and browsing, and, more locally, excessive soil erosion.
There have been proposals to reintroduce Oryx (leucoryx) and Gazella (subgutturosa).