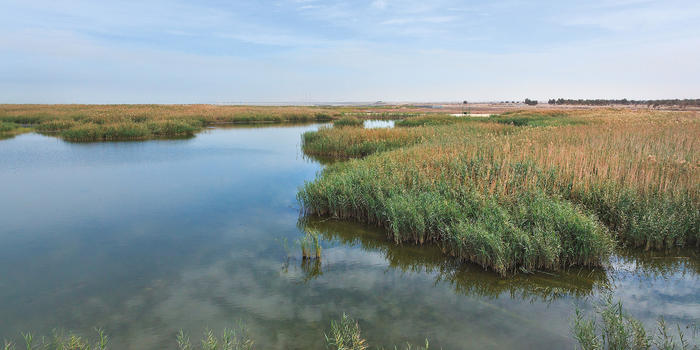 A fenced Nature Reserve, managed by the Environment Public Authority (EPA), consisting of a sewage outfall with pools surrounded by reed beds and sabkhas. Access is by permit only
The only significant area of non-marine wetland in the country, man-made by effluent (sewage plus a variety of pollutants) coming from Al-Jahra town and flowing across sandy sabkhah to the sea, forming stagnant, open, shallow pools and extensive beds of Phragmites. There are scattered halophytes on the sabkhah, and some old plantations of Tamarix in poor condition. The site has great value as a potential field study centre for all educational levels up to university research, and if properly zoned could also provide for recreation. Part of the site outside of the fenced area is a designated camping area. This area represents one of the richest and best-studied small wetlands for birds in Kuwait. It is located just north of Jahra town and accessed north-east off Route 80. Access is by permit and guards are posted at the official entrance point. This fenced nature reserve features a number of shallow pools surrounded by extensive Phragmites reed beds, salt marshes, scattered tamarisk thickets and sandy sabkha flats. Although this is Kuwait’s largest inland marsh, the pools are totally man-made and fed by effluent from Jahra, including treated sewage water. The water levels fluctuate from year to year. A scientific scheme for wetland wildlife management needs to be implemented. There are three small lookout towers with views of the surrounding vast sandy sabkha, the shallow sea and the Jal Az-Zor escarpment in the background. Because Jahra Pool is so easily accessible to the public its protection, promotion and management is an utmost priority for biodiversity conservation and education in Kuwait. An important problem here is development of the surrounding lands (and coastal wetland areas) outside the fenced area. Originally covering only 0.7 km2, the reserve is definitely not large enough to protect the rich birdlife it attracts. Plans are being implemented to expand the reserve to approximately 20 km2 in 2012. However, despite it being a designated protected area and Important Bird Area, the fences are frequently violated by intruding shooters who unfortunately kill and displace birds from this, one of their most important haunts.

This can be updated with known mammals, reptiles and flora found in the farm. Arabian Red Fox does breed in the reserve and as recently as 2013.

This IBA was last assessed in 1993, so there is a need to formally conduct vigorous surveys to re-assess and update the status. This is one of the jewels of the proclaimed Reserves in Kuwait, but even though it is fenced, shooters still come over or through the fence to shoot waterfowl in winter. Ironically they can only be prosecuted for trespassing, which highlights that legislation has a long way to go to provide comprehensive protection of migratory birds.