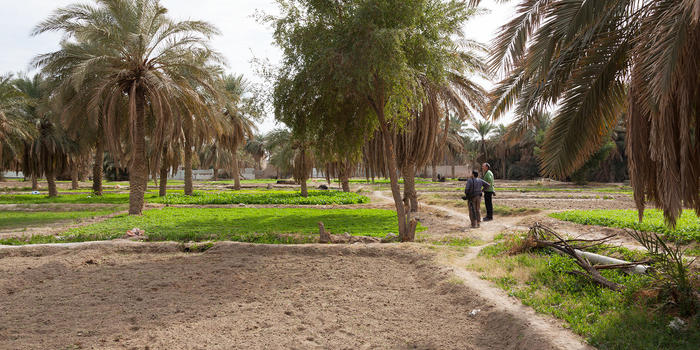 An area of traditional commercial and subsistence farms situated in the centre of Jahra City and is fed by from an oasis that is now being pumped. Ali’s farm has a small pond that is used to hold water for watering the crops. Access to some is open, but for others requires permission from the owners. When visiting, be respectful of the crops and be friendly with the workers and you will be welcome back anytime. An area of private traditional commercial and subsistence farms in the centre of Jahra town. Access into this area should be made primarily through resident guides so as not to disturb local farmers. Tall groves of date palms, vegetable gardens and shallow cisterns with water provide for a truly authentic oasis scene. The cool waters and patchy agricultural lands attract many birds especially on migration and in winter. This place is obviously important because of its lush vegetation and the oasis waters. The traditional irrigation ditches and cisterns depend on a steady supply of cool clear well-water and since this area is actually on the urban edge of Jahra town, the quality and quantity of these waters is vulnerable to change.

Despite its location, Jahra Farm has been a hotspot for many rarities over the years. It is literally in the center of Jahra City suburbia. The patches of green crops that are well watered, provide food and refuge for both resident and migratory species. Species that have bred include White-eared Bulbul, Rose-ringed Parakeet, Common and Bank Myna and White-throated Kingfisher.
Many migrants stop over during Spring and Autumn migration and some specials include; Wood Warbler, Icterine Warbler, River Warbler, Thrush and Common Nightingale, Semi-collared Flycatcher, Basra Reed Warbler, Hypocolius, Wood Lark, Water, Tree, Meadow and Red-throated Pipits.
A few of the less common migrants include; Common Chaffinch, Eurasian Siskin, Black-throated Thrush, Redwing. Shikra, Ring Ouzel and Indian Roller have been recorded here in the winter months.
Jahra Farms have produced a host of exciting vagrants over the years, birds like; Eastern Nightingale, Eastern Bonelli’s Warbler, Great Snipe, Dusky Warbler, Ashy Drongo (2-years in a row) and Oriental Turtle Dove. Interesting birds to note here are Hypocolius and a naturalized population of Bank Mynah. White-throated Kingfishers breed here and may hunt the Green Toads in the irrigation ditches. Although quite small, this area has regularly hosted Shikra, Rufous Turtle Dove, Indian Roller, Black-throated Thrush and Semi-collared Flycatcher, as well as all three Western Palearctic records of Ashy Drongo – a vagrant from the Indomalaya realm. Other notable records from this site have been Great Snipe, Dusky Warbler, Redwing and Eastern Bonelli’s Warbler.

Green Toad breeds in the pools and channels.