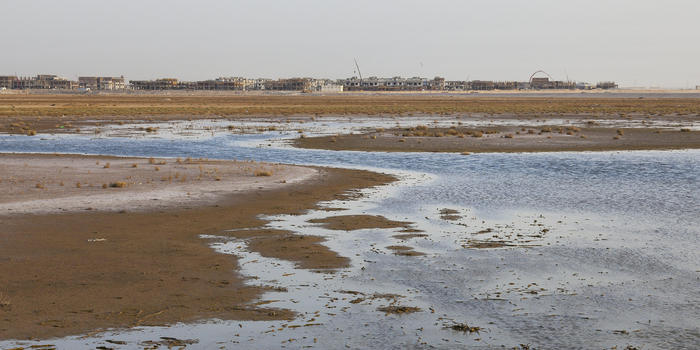 The most Easterly sewage and drainage outfall from the Jahra Area near Judailyat with extensive reed beds, grassy marsh area on the coastline and degraded sabkhas further inland. Access off the 605 exit on Highway 80 heading north and is via a dirt road after negotiating the maze of new roads inside the recently developed suburbs. These new developments will put a lot of pressure on this location. This sewage and drainage outfall, with its extensive reed bed, forms the largest reed swamp habitat in Kuwait. It is located immediately inland near the southwest shore of Kuwait Bay. This has traditionally been the place to see the Basra Reed Warbler, a unique regional and summer breeding specialty, along with many other reed birds, a few of which also breed in summer. The wetlands here traditionally have also seen huge flocks of migrating Yellow Wagtails and Red-throated Pipits, along with sporadic visits by Asian Buff-bellied Pipit. However, recent development pressures have dried out and impacted much of the reed bed and bird sightings are vastly reduced. Sadly much of the site is slated for housing and other developments. Nevertheless, this site is still worth visiting to search for migrants, and the foreshore on an incoming tide hosts similar spectacular wetland bird concentrations as elsewhere on the southern shores of Kuwait Bay.

JEO was one of the prime birding sites in Kuwait until the recent developments of the new Judailyat suburbs and excavation of the outfall which prevented the sewage water spreading over a larger area. This resulted in the loss of a large area of reeds which are now restricted to the sides of the outfall. Despite these challenges, JEO does continue to produce quality birds and more importantly breeding Basra Reed Warbler in the summer of 2009. Many other Warbler species are present at JEO with numbers of them breeding and include; European Reed Warbler, Great and Indian Reed Warbler, Savi’s and Cetti’s Warbler, Sedge and Moustached Warbler, Graceful Prinia. Green and Yellow-browed Warbler have also been recorded at JEO. With the extensive reedbed, all 3 Crake have been recorded on passage. Other excellent passage rarities have included Buff-bellied Pipit and Calandra Lark, Sacred Ibis, Grey Phalarope, Black Tern, Black Stork, Spur-winged Lapwing, Arctic Tern, Red Knot, Common Crane, Franklin Gull, Booted Warbler, Hooded Wheatear and Amur Falcon. The inter-tidal mudflats, as with Doha Peninsula are excellent for numbers and variety of Waders, Herons, Gulls and Terns and of course Greater Flamingos.

The Intertidal mudflats are home to a few species of Mudskipper, some unique crabs.

Provide Environment Information Boards of bird species in JEO. Aim to protect JEO from the pressure of residents in this new urban area.