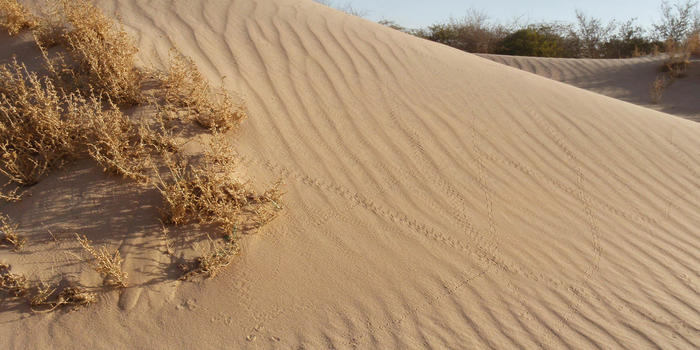 An internally draining wadi forming the north-western border with Iraq. The area is part of a flat, desert plateau of hard-packed gravelly sand with numerous playas, at 240 m. Its northern side is bordered by Wadi Al-Batin, where the land falls away some 45 m and is characterized by shallow, rocky gullies. The plateau is dominated by Haloxylon and, in spring and early summer, by Stipa grass. In rocky gullies Zilla is common, and many annuals flourish including Diplotaxisspecies. Traditionally the area has been used for grazing, hunting and recreational camping; the main economic value of the land probably lies in its underground water reserves. This is an arid shallow valley filled with alluvial sediment, reworked aeolian sands and scattered rock outcrops in Kuwait’s western desert – on the Saudi and Iraqi frontiers. The wadi is a relic of the watercourse that once ephemerally flowed along the length of the border and is now a subtle gulley feature in a vast near-flat desert. This area is representative of the northeastern Arabian desert wilderness and sustains an assortment of birds that are scarce over the more disturbed ground within much of Kuwait.

Until overgrazing severely damaged the vegetation in the early 1980s, a representative breeding bird community occurred, comprising Cursorius cursor, Bubo ascalaphus, Athene noctua, Eremophila bilopha, Alaemon alaudipes, Ammomanes deserti, Ammomanes cincturus, Melanocorypha bimaculata and Galerida cristata. Proper protection and management could see a return of many of these species. Pharaoh Eagle Owl and Lilith Owl breed on the rocky outcrops on the wadi’s valley sides. In winter and spring desert bird specialties such as Desert Lark, Bar-tailed Lark, Temminck’s Lark and Trumpeter Finch are often found and probably breed in most years. Other true desert rarities, such as Thick-billed Lark, Pale Rockfinch and sandgrouse are sometimes observed. Much of this area has also been proposed as a protected area and it is Kuwait’s largest designated Important Bird Area (covering an area of 575 km2). However, this area is definitely one of the least visited and one of the most poorly monitored areas for birds in the country.

This can be updated with known mammals, reptiles and flora found in this vast area.

This IBA was last assessed in 1993, so there is a need to formally conduct vigorous surveys to re-assess and update the status. Overgrazing in the last 12 years seriously reduced the wildlife value of the area, and movement of military vehicles during the 1990–1991 conflict with Iraq caused major damage to vegetation and desert crust. At present much scattered, unexploded ordnance is deterring grazing activity, and anecdotal reports from military pilots suggest that the area is fast becoming revegetated. A study was carried out by the Kuwait Institute for Scientific Research and Kuwait Municipality to designate the area as a National Park.